Studio MiZi are taking it to the streets with their first collection Resurface. Drawing inspiration from the bright orange bricks at Nonna’s house to the mismatched lino at the local laundromat the collection invites us to explore the ever-evolving Australian identity, and celebrates some of the common surfaces that are recognised as the essence of our culture. Based in Melbourne this boutique brand is creating quirky and affordable homewares that tell a story.

Graphic Designer Michael Zito came to the conclusion that the 9-5 thing wasn’t for him so he decided to take the plunge into the rug trade, and we’re so glad he did! The bold textiles that make up Studio MiZi rugs don’t take themselves too seriously and with an affordable price tag they are sure to become a talking point in many a home. Baths “The gradient of blues and sharp lines that make up a grid system create the scene for this subaquatic rug. Influenced by my time at Brunswick Baths, I’ve always been fascinated by the cleanliness and structural minimalism found in public pool design.” Nonna’s “This rug pays homage to the bright orange, cream, and brown brick dwellings of many of Australia’s Italian population. Spending much of my childhood at my late Nonna’s house, I find solace in these uniquely composed foreign environments.” Subway “One’s commute isn’t complete without a  stroll through the crumbling beauty of Campbell’s Arcade. Like much of Flinders St Station this passage has so much potential yet remains unloved. The faded pastel pinks, purples, and golds can now be yours to own — unavoidable wafts of sewerage not included.” City Edge “Those tedious hours at the laundromat were made easier thanks to the unintentionally creative floor at City Edge. A mix of  geometric pattern meets a variety of exaggerated terrazzo to create this unique statement for the home or studio.” 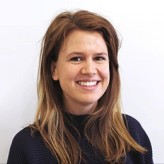 Our lovable designer who says things like kerning, white space and that file size is too big. Sofie makes sure everything looks damn fine for your viewing pleasure.

Join Hunting for George on Snapchat